An ancient evil (known as the Ancient One) is stirring in the world. Now, you and your trusted colleagues must travel around the world, to defend against the coming horror. You will face foul monsters, brutal encounters, and strange mysteries. You and your fellow investigators must unravel the mysteries around the globe in order to push back the mayhem that threatens to destroy humanity.

The investigators’ goal is to banish the Ancient One from this world by solving Mysteries.  Mysteries are solved by resolving tasks on the Mystery cards. Through the Mystery cards (along with the locations of otherworldly gates, menacing monsters, and helpful clues), investigators will decide where to travel.

In addition, investigators need to deal with many dangers facing the world. These appear in the form of Gates (spawning Monsters and awakening the Ancient One) and Rumor Mythos cards (which harm investigators and can end
the game prematurely). Why I Love Eldritch Horror - with Tom Vasel

Eldritch Horror is a cooperative game of global mystery and terror in which one to eight players take the roles of globetrotting investigators working to solve ... 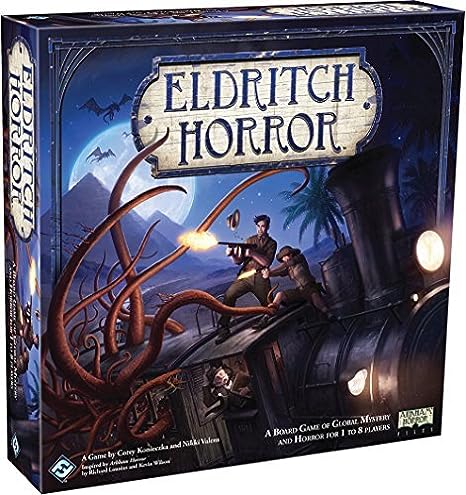 Betrayal at House on the Hill