Easy to Read Online Guide on how to play Everdell

Check out our easy to read guide of the Everdell Board Game rules. We cover the objective and gameplay to make it easy and quick for you to get your game started.

The game revolves around the valley of Everdell where a civilization of forest critters is thriving and expanding.

The citizens have prospered under the shelter of the enduring Ever Tree.
However, the time has come for new territories to be settled and new cities
established.

You will be the leader of a group of critters to address this task. You will construct buildings, meet lively characters, host events—it will be a busy year! Play proceeds clockwise. You will take turns taking 1 of the 3 possible actions (only one action is taken per turn):

Workers are essential for the expansion and success of your city.
You will need to deploy them to various locations in Everdell in order to:

There are two types of locations: exclusive and shared (portrayed with an open encircling ring).

placement icons are only used in a four-player game. You may not place 2 of your own workers on a single Forest location. You may also place 1 of your workers on any remaining basic Event or special Event to achieve it.

To achieve the Event: Activates once immediately when played. It never activates again

Activates once immediately when played, and once during the Prepare for Season actions in spring and autumn.

Activates when a worker is placed on it. Cards with the OPEN symbol may be visited by opponents

Grants you bonuses after playing certain card types, and offers different ways to play cards for a discount.

Worth the base points and the listed bonus points at the end of the game.

you gain 1 new worker and activate all green Production cards in your city.

you gain 1 new worker. There is no Production in summer, but green cards still activate immediately if played during summer. Also, you may draw up to 2 Meadow cards when you prepare for summer

you gain 2 workers and activate all green Production cards in your city.

End of the Game

Tip: You may find it easiest to take the following approach when adding points:

In the solo game, you compete against an old rodent known as Rugwort, and his pack rat ruffians.

He will be returning to Everdell for three years in a row, each time bearing a new
title of nastiness. You must find a way to overcome his tricks and rid Everdell of his filth

Year One: “Rugwort the Rascal”

Play the game as normal with these new rules:

During the spring Prepare for Season action, move his worker from the 3 twigs location to the 2 resin location.

During summer, move his worker to the 1 pebble location.

During autumn, move his worker to the 1 berry and 1 card location. In autumn, remove his worker from the 3rd Forest tile and place it instead on the 3-point Journey space.

Same rules as Year One with these additional rules:

Same rules as Year Two with these additional rules:

How to play Everdell

How to Play Everdell | Roll For Crit 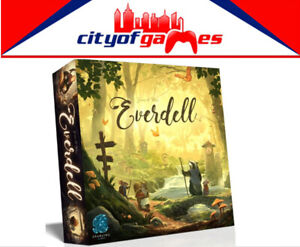 Ebay.com
Everdell Board Game Brand New In Stock
out of stock
Buy Now 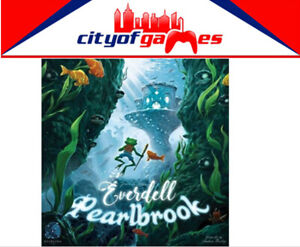