How to play Cribbage for dummies. This guide explains the Cribbage Rules in simple steps.

Quick and Easy Uno Rules and Instru...
Quick and Easy Uno Rules and Instructions to help get your game
Contents hide
What is the object of Cribbage?
Cribbage Game Setup
Players select colour and place pegs
Dealer deals cards
Players discard cards to the Crib
Scoring Points
The Starter
Point Value of Cards
Step-by-Step How to Play Cribbage Rules
Starting player plays a card and calls out the value
Next player plays a card and adds the point value
Player whose played card takes the running total to 31 scores 2 points
Player calls ‘GO’ when they cannot play a card without going over 31
The remaining players continue until they each call “GO”
Scoring during play
Players’ cards are exhausted
Scoring of hands
Winning
What are the scoring rules for Cribbage?
What are 4 fives worth in Cribbage?
How many points do you get for pulling a Jack in Cribbage?

What is the object of Cribbage? The goal is to score 121 points first. Players earn points for playing and combining cards. Scores are tracked with a cribbage board instead of pencils and paper.

Select a player to be the dealer. Pick a card from the deck and highest card is the dealer.

Each player selects a colour and places their pegs in their starting tracks on the cribbage board.

2 player Cribbage Game
The dealer deals 6 cards to each player.

3 player Cribbage Game
The dealer deals 5 cards to each player. Players look at their hand and discard 1 card to the crib.

4 player Cribbage Game
Players split into teams of 2 and sit opposite one another. The dealer deals 5 cards to each player. Players look at their hands and discard 1 card to the crib.

Players discard cards to the Crib

Set an area close to the Dealer to be The Crib. All cards discarded to the Crib are placed face-down. The Crib belongs to the dealer and is not used until a hand has been played.

2 player game: Players discard 2 cards from their hand to the crib.

3 and 4 player game: Players discard 1 card from their hand to the crib.

When a player scores points, they move their peg forward the number of holes as indicated by the points.

The player on the dealer’s left cuts the remaining cards (split the deck). The dealer turns over the top card of the lower portion of the cut deck and places it on top of the whole deck. The Faceup card is called the Starter and is not used while the hand is played.

Dealer scores 2 points if the starter is a Jack and moves their peg ahead 2 holes on the track. Dealer does this before playing their hand.

Step-by-Step How to Play Cribbage Rules

This section outlines the steps on how to play Cribbage.
The player on the dealer’s left starts a round by playing a card and the play continues clockwise. Each round comprises 2 scoring phases: Scoring during play and Scoring of hands. Scoring during play occurs when players play cards from their hand and form scoring combinations with the current played cards. Scoring of hands occurs when all possible hands have been played by all players.

Starting player plays a card and calls out the value

Starting player plays a card in front of them and calls out the point value.

Next player plays a card and adds the point value

Next clockwise player plays a card to the pile in front of them, adds the point value of their played card, and calls out the RUNNING TOTAL. This continues on to the next player. The running total can never exceed 31. Players score during play when they hit specific card combinations.

When a player players a card and takes the total to 31, they peg 2 points. Played cards are turned over and the next player begins a new play.

When a player cannot play without the running total going above 31, that player says “go”.

The remaining players continue until they each call “GO”

Next, turn over the cards already played and the next player starts with the count starting at zero again. 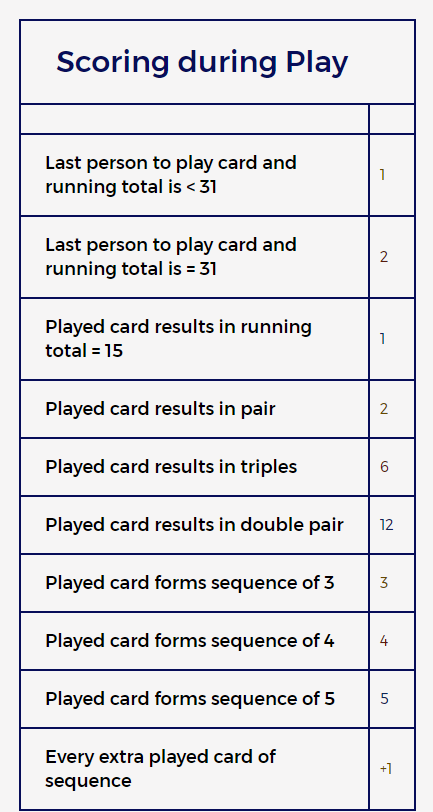 When taking turns to play cards, players score points based on the following combinations and events.

Fifteen
Played a card that makes the running total 15. Score 2.

Pair
Add a card of the same rank as the most recently played card (e.g. Jack with Jack). Score 2.

Triplets
Add a 3rd card of the same rank. Score 6.

Runs (Sequence)
Adding a card that forms a running sequence with the cards recently played.

Sequence of 3
Move your peg 3 holes.

Sequence of 4
Move your peg 4 holes.

Sequence of 5
Move your peg 5 holes.

Each player makes as many combinations as possible for scoring.

First player or team to travel along their path and score 121 points wins.

What are the scoring rules for Cribbage?

At the start, the dealer may score additional points if the starter card is a Jack. Players play cards and score points based on combinations played during play. Once all cards have been played, all players gather their played hands and score their hands.

What are 4 fives worth in Cribbage?

4 fives are worth 20 points. Double pairs are worth 12 points. You can form 4 combinations of 15 giving you an additional 8 points.

How many points do you get for pulling a Jack in Cribbage?

If the player is the Dealer, they score 2 points if the starter is a Jack and moves their peg ahead 2 holes on the track. Dealer does this before playing their hand.