Find out about Unstable Unicorns

Check out our easy to read Unstable Unicorns Rules Guide.

What is the objective of the game Unstable Unicorns?

The objective of Unstable Unicorns is to be the first player to collect 7 unicorn cards in your play area (stable). For 6 – 8 players: Only 6 unicorns are required. You race to collect unicorns by playing special effect cards that improve your chances or hinder others by reducing their ability to collect unicorns or destroying their unicorns. 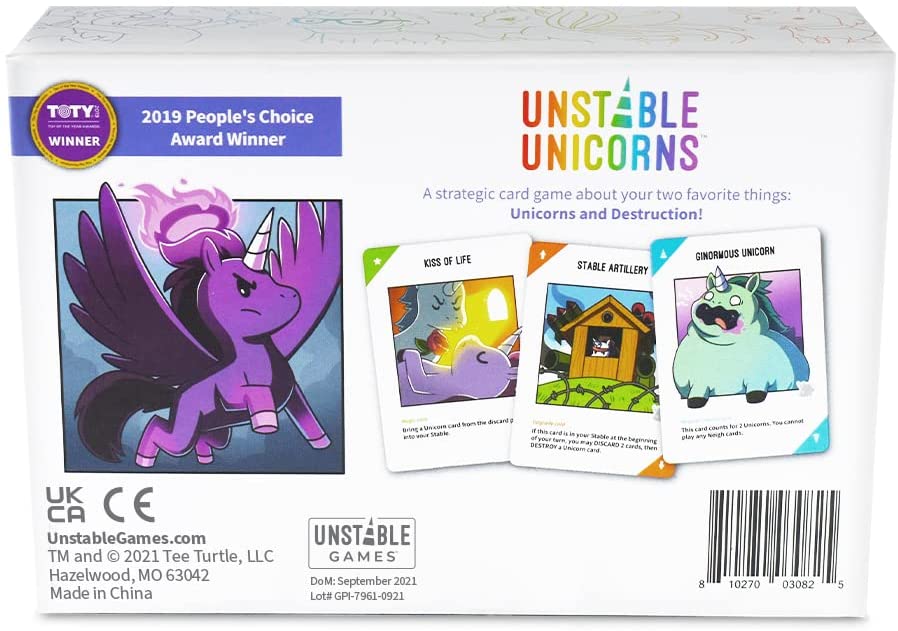 Players take turns to play special cards that help them collect the needed number of unicorns to win the game.

Any cards in your Stable that take effect in the beginning of the turn are triggered. Optional effects during this phase cannot be triggered once you move to the next phase.

Draw 1 card from the deck.

Discard cards from hand till you do not exceed the hand limit of 7 (unless otherwise stated). End your turn.

Playable any time any other player plays a card (unless otherwise stated). If played in response to your played card, you may respond with your Instant Card (even though you already played a card this turn). Any number of Instant cards can be chained in a single turn.

Creates positive effects. Playable in any player’s
Stable. If played in your Stable, it affects only your Stable (unless otherwise stated).

Creates negative effects. Playable in any player’s Stable. If played in your Stable, it affects only your Stable (unless otherwise stated).

Creates ONE-TIME effects. Immediately takes effect when played and is then discarded.

Playable in any player’s Stable. 3 sub-types of Unicorn Cards are described below.

Only enter a Stable from the Nursery. Never added to the deck, a player’s hand, or the discard pile.

Unicorns with no special effects.

Unicorns with effects. Some are triggered and some are continuous.

Unicorn, Upgrade and Downgrade cards have no effect while in hand. Effects activate only when they are in your Stable.

When a card’s effect triggers another card’s effect, each effect is a link in an effect chain. Resolve the first link’s effect before progressing to next link. Resolve all links before gameplay continues.

If multiple triggered effects require a target, you cannot target the same card twice in the same link. If insufficient cards to target, trigger as many effects as you have targets. You must select targets for mandatory effects before selecting targets for optional effects. No player can win until an effect chain has been completely resolved.

Other Rules to note

Play vs. Bring Directly into Your Stable

“Play” refers to playing a card from your hand
If you “bring a card directly into your Stable,” the card is ‘PLAYED’.

To “pull” a card, it must be picked randomly. To “choose” a card, you look at your options and pick the card.

Some card effects allow you to search the deck or the discard pile for a card. Once retrieved, reveal the chosen card to all before adding it to your hand.

How many cards do you start with in Unstable Unicorns?

Shuffle the black-backed cards (including any expansion cards you would like to use) and deal 5 cards to each player.

Can you draw from the discard pile in Unstable Unicorns?

No. Cards are drawn from the deck. Cards that have been sacrificed, destroyed or discarded are placed on the Discard Pile during the game.

Do you have to discard a card in Unstable Unicorns?

Before ending your turn, you discard cards if the number of cards in your hand exceeds the hand limit of 7 cards. Discard till the hand limit is reached.

How to Play Unstable Unicorns and Review Videos