As part of my blog posts, I will be providing regular reviews and recommendations on specific genre or types of board games. In this recommended worker placement board games post, let’s take a look at the game, Paladins of the West Kingdom by GarpHill games.

Learn how to play

What are worker placement board games?

These games involve players managing a personal or shared supply of available workers and resources. Resources and workers are used to perform actions to get ahead in the game (scoring of points, gaining abilities that improve point scoring capability  or opening up new actions). Typically, players will have a choice of personal and shared actions (available to all) and they will have to compete to gain access to these actions. This results in one having to think about:

Now, back to Paladins of the West Kingdom

The game is set in the medieval ages where you recruit workers and manage resources to defend against the Outsiders who are plundering your kingdom. Game is played across 2 boards – a main board and a player board. The game is played in 7 rounds and in each round, players take turns to perform actions.

The main board represents the broader Kingdom and involves actions and rewards available to all players. Players compete to take these actions by fulfilling the associated their associated conditions. You will have the option to Attack the Outsiders, Convert the Outsiders to your faith, Recruit Townsfolk, Garrison Outposts, Commission Monks to spread faith throughout the land or Fulfil the King’s orders.  These actions allow players to stake a claim on various rewards, which provide immediate resources or an ongoing ability.

READ  Get your game started fast with our tabletop rules guide!

The player boards track your attributes (Strength, Influence and Fatih) , outposts, monks and the Paladin you have chosen to assist you. There are also actions available to you on your Player Board. You will be able to Fortify your area to gain rewards, take the Pray action to re-use your workers and perform more actions to gain an advantage or Develop and reduce the cost of actions in future rounds.

Most actions require you to pay a cost. These costs involve silver, provisions and workers of various types.  Certain actions and their associated rewards are restricted by your attributes (Strength, Influence and Faith). To attain them, you will need to work at taking actions to improve them.

At the end of the 7th round, the game ends and players calculate their Victory Points earned. Your past completed actions and rewards will determine your number of Victory Points.

Paladins of the West Kingdom is deep in strategy. The type of actions that you can take and rewards that you can attain will be dependent on:

This will require you to think about which areas to focus on, when to focus, which rewards to target to help you get ahead of the game. The game doesn’t just revolve around you. The presence of the main board and its rewards, require you to also be aware of what’s available to your opponents as they may get ahead if they manage to take advantage of some the available actions.

The need to manage and optimise various factors results in the game having multiple options to victory. If you like games that require you to plan ahead, optimise and react dynamically to player decisions, this is a game I recommend you consider.

Learn how to play Paladins of the West Kingdoms 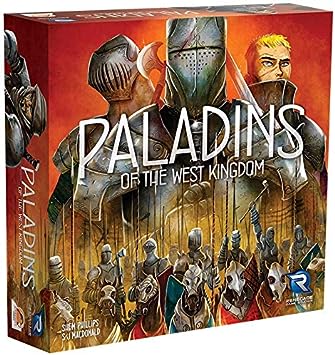 Paladins of the West Kingdom (engl.)