Be sure you have a light meal when you play these funny board games for family as they are guaranteed to make one laugh like hell. Unless you don’t like laughter, these games will bring joy and laughter to the family! 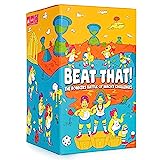 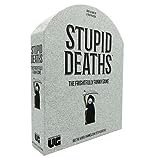 Poetry for Neanderthals by Exploding Kittens -… $13.49

You'll laugh while trying to outsmart your friends in Moose Master, which is the right card game for adults, teens, and kids. Easy to set up and learn. Getting together with friends and family can be a lot of fun with this icebreaker game.

What is the objective of Moose Master?

It is frustratingly funny. It’s a hilarious game that gets everyone laughing hysterically. The changing rules are hard to remember, even though they are right in front of us. Also, it is fun to call out other players' mistakes. The action and activity cards create a lot of interaction and laughter.

Battle, Defend and Grow your Hamster Horde with Gyrating Hamsters

Laughing games for adults and teens - Looking for something to do with your time? Have fun playing Gyrating Hamsters.

What is the objective of Gyrating Hamsters?

The objectives of this hilarious hoarding game are simple and straightforward: Collect 16 hamsters or 9 from the same clan – attack, battle, and win! Growing your hamster horde faster than your opponent will provide you with 30 minutes of entertainment, battle, and strategy.

What makes Gyrating Hamsters a funny board game?

The action cards played by players can suddenly change the game dynamics. For instance, Action cards can suddenly stop a hamster battle between 2 players, Chaos cards like the Battle Royale card can create events where everyone has to battle with only one last hamster standing. The struggle to attack and capture hamsters and defend your clan makes it a highly interactive game with lots of fun and laughter.

Taco vs Burrito is a card game where players compete to build the weirdest, wildest most valuable meal.

Players choose to be a Taco or Burrito.

Players get a set of 5 cards. There are 4 types of cards: Ingredients, Tummy Ache, Hot Sauce Boss and Action cards.

During their turn, players choose to place a card in any Taco or Burrito or play an action card.

When any player plays their last card, the game ends and players add up their points. Player with the most points wins.

There are 10 rounds of challenges in this game. Pick up a challenge card and read it out loud. After that, everyone bets on their own skills. After you place your bets, go around the circle attempting the challenge. Points are banked for successful players. After 10 rounds, the player with the most points wins.

Example of some challenges that will make everyone laugh

Some of the crazy challenges are bouncing 2 balls into 2 cups simultaneously using only one hand or racing to stack a pyramid of cups using your elbows and keeping your eyes closed.

It's definitely worth buying if you're looking for an interactive game with a group. Everything you need is included. Multiple game plays for different amounts of people. For adults, you can make it a drinking game, but it's also fun sober.

Identify which stupid deaths are actually true as you race around the game board. Don't let the Grim Reaper catch you - he'll end your life! There are two ways to win this game - either be the first player to reach the finish (the RED space on the game board) or be the last player on the board after all other players have been caught by the Grim Reaper.

Here's a game of dark fun where the dead right players win! There are many people who die in utterly ridiculous ways, and Stupid Deaths challenges players to distinguish between myth and reality.

Can be funny for some.
Game work well with bigger groups. If you are into stupid death trivia, it may be funny. However, for some, it may just feel like a card trivia game.

Poetry For Neanderthals Is A Competitive Word-Guessing Card Game where you must speak good or get whacked with a No! Stick.

During a team's turn, the team's Neanderthal poet uses only single-syllable words to give clues so the team can guess the secret phrase.

What makes this game hilarious?

Listening to the Neanderthals in your team utter single-syllable words to explain phrases will make you laugh at how dumb they sound. Everyone is guaranteed to roll in laughter when someone messes up and gets smacked with the inflatable club.

In Mustachio, teams of players score points by collecting tricks (cards) and correctly bidding on how many tricks they will score.

Mustachio is a game of trickery. You win through a combination of correctly guessing the number of “tricks” your team will win per round while capturing (sometimes) innocent point cards along the way. You do so by colluding with your partner to outwit your unwitting opponents. However, you cannot speak with your partner and you need to be able to guess how they play.

Each round, players play their cards and determine who wins the tricks. There are special cards like Super Villian cards that give the game a twist.

The product as a whole was high quality, with strong cards, hilarious card designs, and rules that make for exciting gameplay.

Game is simple enough for 5 years and filled with enough strategy that it makes it fun for older children as well as adults within the family.

As you fight to become the Poo King, you'll laugh (and cry). Build the first poo pyramid to win. Do not let your "friends" sabotage you with crap attacks!

Developed by comedians, this game made quite a splash on Kickstarter, surpassing the funding goal by 3,600%!

The first player to build a Poo Pyramid of Poo cards wins!

Build it by laying down these poops in this order:

A Crap Attack is a way for opponents to attack your pyramid in between turns.

As an example, suppose you laid down a Poo Peasant. In response, someone Crap Attacks you by placing a card of the same type on top of yours (in this case, a Poo Peasant).

Build your pyramid while decrapitating anyone who gets in your way to become...