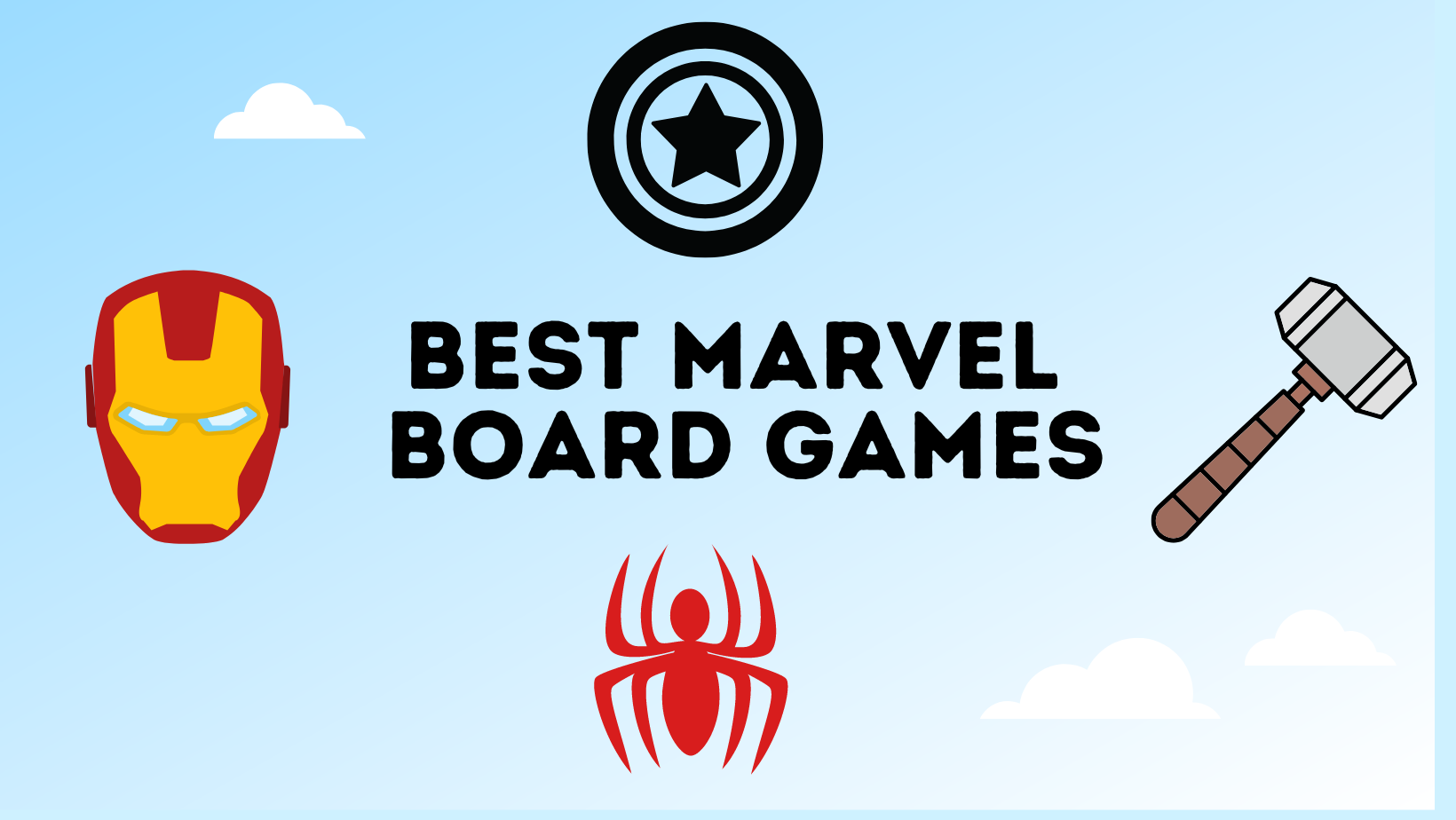 What’s there not to like about games involving superheroes and villains? In this post, we list the best marvel board games to play. These games let you take on the role of your favorite Marvel superheroes to defeat evil villains and save the planet.

Cooperate and Save the World

Marvel Champions the Card game is a highly rated marvel board game that brings you and your friends on an adventure campaign. If you are looking for a cooperative Marvel board game that you can not only play with your mates but also expand on its universe, be sure to check it out.

Marvel Champions: The Card Game is a cooperative card game for one to four players. In the game, players take on the role of a Marvel hero and their alter-ego. During the game, players work together to defeat an evil villain (controlled by the game).

Marvel Champions: The Card Game is played over a series of rounds. A player phase and a villain phase are included in each round. The players take turns in player order during the player phase.

During the villain phase, a threat is placed on the main scheme. The villain activates once per player and either attacks the player or advances his or her scheme.

In addition, the game contains cards that add minions, treacheries, side plots, and attachments to the villain's forces and to besiege the heroes. As the villain phase ends, the first player token passes to the next player clockwise, and the next round begins.

This pattern continues until either the players or the villain win.

Put an end to the Mastermind before they complete their nefarious plan by recruiting powerful Heroes and attacking Villains rampaging through the city. As new threats arise, take them on together or competitively.

Create your own scenario, with different heroes, masterminds, schemes, and more for a unique experience. Build your own deck to counter evil's plans.

The Marvel Universe is being threatened by hordes of powerful Super Villains, led by masterminds such as Magneto and Dr. Doom!

There are heroes like Spider-Man, Iron Man, and Wolverine! A deck of basic Hero cards is given to each player in this game for 1-5 players.

During your turn, you play a card from the Villain Deck, showing how Villains invade the city, capture Bystanders, and create special events. After that, you play Hero cards from your hand to generate Attack, Recruit Points, and special abilities. Heroes attack Villains to defeat them. To enhance your deck, you use Recruit Points to recruit better Heroes.

Every time your deck runs out of cards, you shuffle your discard pile to make a new deck, including all the new Heroes you recruited.

As a result, your deck gets stronger over time. The evil Mastermind can be defeated if you build up enough power! Be careful, though: if the players don't defeat the Mastermind quickly enough, the Mastermind will complete their dark Scheme and win!

Marvel Heroes battle each other!

Don’t want to play as a team? You would rather battle each other? The following Marvel games bring you into the battle!

As masterminds, two players control a team of supers (represented by dice) to combat in Marvel Dice Masters: Avengers vs. X-Men each other!

The game consists of rolling dice, buying dice, sending team members into combat, then attacking the enemy mastermind on every turn.

Put an end to the opposing mastermind's life by reducing it to zero!

Fans of the Marvel Universe are going crazy over Marvel United, the hit strategy card game crowd-sourced by fans worldwide. Become the Hero you always wanted to be! Designed by Eric M. Lang and Andrea Chiarvesio, Marvel United is a fast-paced, cooperative game where players take control of Marvel Heroes and work together to thwart the schemes of Villains.

Supervillains are sowing discord, securing power, and crushing ordinary people-seemingly unopposed. Heroes rise where powerful villains fall! Their mission will be to protect the innocent, face down threats, and take down these villains, once and for all. You can only win by standing united! You hold the key to the future of the world!

All of you are in it together in Marvel United: either you work together to defeat the villain's master plan, or you're all defeated and must start over.

A turn of the cards dictates the gameplay in Marvel United, which is random and constantly changing.

These next games allow you to take the role of a villain in the Marvel Universe.

Become an iconic Marvel villain. Use sinister abilities to achieve your goals. Master the game with Thanos, Hela, Killmonger, Ultron, and Taskmaster! Each player takes on the role of a Marvel Villain. On your turn, place your Villain mover at a different location in your Domain, then perform the actions available there. The first Villain to complete the Villain's objective wins!

Battle it out with Marvel Miniatures

Get into Marvel action with well-crafted miniatures. These miniatures bring the action to life!

Crisis Protocol is a tactical hobby game set in the Marvel Universe where you can save or conquer the world! Your superpowered forces will face your friends in battles of cataclysmic proportions as you collect, assemble, and paint detailed miniatures of your favorite characters.

Complete narrative missions on an interactive tabletop using legendary heroes and villains. Coordination and superpowers are at your fingertips as you harness incredible superpowers. With innovative interactive terrain rules, characters can throw, smash, and collide with virtually any terrain element.

Even though each character is powerful, none of them can win alone. Lead them, it's up to you. For ultimate victory, Marvel Crisis Protocol requires bold tactics and cunning strategy... At least until the next crisis strikes!