How to play King of Tokyo Rules

Easy and fast way to learn how to play King of Tokyo rules. Setup, gameplay and official rules simply explained.

What is the goal of King of Tokyo? 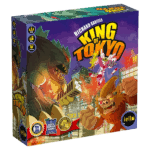 Players play as monsters, robots, and aliens who battle to become the King of Tokyo. Players roll various dice to battle each other and fight to control Tokyo.

Player choose their monsters and set LIFE POINTS and VICTORY to 10. 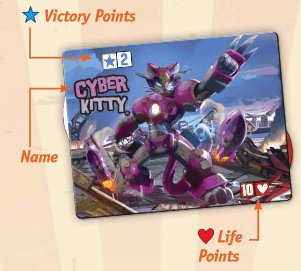 Tokyo gameboard is placed in the center of the table. Shuffle cards to form the deck and deal 1st 3 cards face up and place them next to the board.
Put black dice in the center and set green dice aside.

Form a pool of energy cubes

Use only Tokyo City for 2 to 4 players.
For 5 to 6 players, use both Tokyo City and Bay. 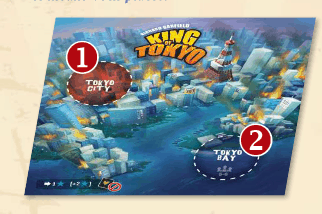 Step-by-step How to Play King of Tokyo

This section outlines the steps and rules on how to play King of Tokyo. The game plays clockwise. Each player rolls 6 black dice. The player with most smash icons

showing on dice goes first. When tied, players roll until one player has the greatest number of smash dice

Resolve all dice in any order.
Symbols shown on your last dice roll represent your turn actions.

You may buy 1 or more of the 3 face-up cards with your Energy Cubes
The card indicates the cost of Energy
Replace bought cards immediately from top of the deck
New cards are immediately available for purchase
Spend 2 energy cubes to discard and change all 3 face up cards
There are 2 types of Power Cards:
Keep: keep cards face up in front of you until end of game
Discard: Resolve cards immediately and discard
Smoke, Mimic, Shrink and Poison tokens are used with certain power cards.
Find out about Power Cards.l

Some card effects are resolved during this step.
It is the end of your turn, hand the dice to the player on your left.

If you roll three-of-a-kind of 1, 2, or 3, gain as many Victory Points as the number. Each additional die rolled of the same face, gives you 1 additional Victory point.

Gain 1 Energy from the pool for each energy icon rolled and place them in your reserve and keep them for spending later.

No Player/Monster starts the game in Tokyo. The Monster who plays 1st does not cause Monsters to lose life points he gets a

Smash dice throw.  You can’t leave if you lose Life Points from Power Cards do not

Effects of being in Tokyo

If there are 2 Opportunist in play, the 1st Monster clockwise whose turn it is get 1st chance to buy newly revealed cards

Monsters of players seated to your left and right each lose 1 Life Point.

Discarding your Keep cards happens in the End of Turn step. You get back full cost of card as printed.

Copies effects of a card as if it had just been played. If the copied card is discarded, Mimic no longer has an effect and you take back associated token. You can place it on another Keep card at start of next turn (before rolling dice) by spending 1 energy cube

Poison and Shrink tokens stay even if their associated cards ard discarded. You cannot remove tokens while in Tokyo. You must be outside of Tokyo to use Heart icon dice rolls to remove tokens.